I finally made up my mind and entered the race "Kraftprovet" today. I have thought back and forth for a few days and have had a hard time deciding wether I should run this race or not. Yesterday I met a friend who had made his mind up and he said to me "ok, see you at the starting line then" And I guess that was the kick I needed, so I met him at the starting line and we passed each other a couple of times in the beginning of the race, then I lost sight of him but knew that I was ahead of him, which felt satisfying. (I actually beat him with 6 minutes :-)


The forecast said 16C and light rain wich I thought would suite me. As it turned out it must have been quite a few degrees warmer, no rain and partly sunny. I had dressed for rain so I was a bit warmer than I would have liked but every now and then we ran in areas with a nice cool breeze and some people had also put their garden hoses out to spray the runners and that was also helpful.

I learned a lesson running into the first garden hose fontain - your glasses also get wet - that made my vision a bit blurred until my next walkbreak when I got the chance to wipe them off with my shirt. When running into the next hose shower I took my glasses off and held them away from the water, that worked fine. Lesson learned.


I ran/walked with a 3:1 ratio as strictly as I could, with a few adaptions around the water stops and also at the most brutal hills, and for the last bit I turned the intervall timer off and just ran.


Parts of the track were on rather narrow trails and that made the running part of run/walking a bit difficult. When walking many runners passed me but when running I wanted to go a bit faster than the crowd around me and it was sometimes impossible to pass them as the track wasn't wide enough. That might have slowed the total time down a bit but in return I guess it also gave me a bit of rest which maybe made me stronger for the later part of the race.

Closing in on the finish I passed quite a few runners and that felt really good, then suddenly, out of nowhere, came a guy in a grey shirt and passed me. That woke something up inside my head and I thought "Oh no you don't.. no way I'm letting you pass.." I managed to catch him up and we ran side by side, speeding each other up, towards the finish. Finally he was a bit stronger and reached the line an armlength ahead of me. But we ended up with the same time in the result. (ha, gotcha)

This was the first time I entered this local race and I'm glad I did. I met a lot of friends before and after the race and I also found that many other friends were out watching the race. As they recognized me and shouted my name I got extra power from somewhere, maybe from the joy I find in their concern and interrest in what I'm doing. I hope for a cool day for next years "kraftprovet" and will most certainly participate again in the future.

I'm very pleased with my run. Before the start I said that if can manage 1 hour and 15 minutes I would be happy but was open for a time towards 1:30. As I passed the 5k mark just under 30 minutes I was surprised and then the 10k mark at almost exactly 1 hour. That made me feel even stronger and very pleased with myself. I ended up finishing at 1:09:12. I heard the speaker call out my name and my time just as I finished. It was a lot of fun.
posted by Krister kl. 9:37 PM 1 kommentarer 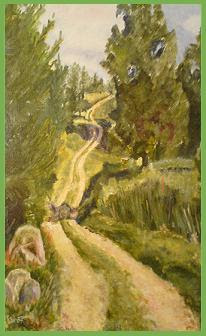